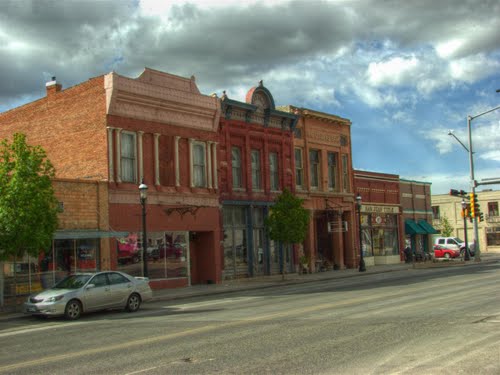 Aztec is located in New Mexico. If you’re not sure where New Mexico USA is, just keep in mind that it’s not New and it’s not Mexico. The Southwesten United States was established back with the US government bought a bunch of land from Mexico in 1850.  New Mexico was established as a state in 1912.

New Mexico basically keeps it’s head down while Texas and Arizona get all the press coverage.

New Mexico is also known for green chile. But we like to keep that quiet just in case there’s ever a chile shortage.

Aztec could be a poster city for Small Town USA. We still have a population of about 6000-7000. Some time in the 1960’s when Aztec won the “All American City Award” someone thought it would be funny to have a sign that said “Population 6,000 and 6 old soreheads.” The soreheads have become a tradition and every year we nominate new soreheads.

Aztec (NM) itself has nothing really to do with the ancient Aztec culture in old Mexico. The area of land that encompasses Aztec has been occupied and used for over a thousand years. The early occupants of this land were the Anasazi, a name derived by the Navajo meaning the ancient ones. Cliff dwellings, pit houses and basketmakers are terms used to describe their sites.

The Anasazi reached their highest peak around the AD 1100 as evidenced by Aztec Ruins. Sometime around AD 1300’s, the area was abandoned for a reason that eludes and is still debated by archaeologists to this day. The area was not used extensively until AD 1500s with the arrival of the Navajo or “Dine”, a nomadic people from the north who hunted and gathered food.

Aztec Ruins National Monument is the remains of a great prehistoric town built in the 12th century. The creators of the Ruins used materials of stone and mortar to create massive masonry and huge apartment houses. The main ruin at the monument covers two acres, stands three stories high and contained 500 rooms averaging 10 by 12 feet.

This terraced pueblo is seven rooms wide at the base and four and five rooms wide across the wings. An enclosed plaza is dominated by the Great Kiva. Tree ring dating provides evidence indicating that most of the pueblo was built between AD 111 and 1115. Cultural and Architectural evidence indicates that the builders who abandoned the site by the middle of the 1110’s were related to the people of the Chaco Culture located at Chaco Canyon to the south. By AD 1125, people reoccupied Aztec Ruins whose culture resembled that of the people of Mesa Verde, Colorado. These people remodeled and enlarge the ruins and occupied the area until they too abandoned the ruins in the late 13th century.

The Animas River, which flows through Aztec, is derived from the Spanish name, Rios de Los Animas Perditas that means “River of Lost Souls.” Two tales arise from why the river was named such. One being that the Spanish fought a number of Indians in a battle and tossed their bodies into the river, the second story suggests that it was named such because of the number of Indians and early explorers who lost their lives while trying to cross the river. Regardless of how the river got its name, it has continually provided the valley with the sustenance so needed in a semi-desert environment, water.

The name of Aztec can also be attributed to the misguided notion of Escalante’s visit to the San Juan Basin and finding large ruins, now known as Aztec National Monument, that were thought to have been built by the Aztec Indians. However, we know today that the Anasazi were responsible for the construction of the ruins. Yet with an early Mexican population settlement, the name remained with the city.